Madeline Collin, a 24-year-old activist with Gaucher disease, worries that patients like her will suffer deeply if Britain leaves the European Union (EU), as scheduled, at the end of this month.

Collin is an expert on the subject. For her University of Bath dissertation, she analyzed Brexit’s long-term impact on the 3.5 million people in England, Scotland, Northern Ireland, and Wales, who have rare diseases — and concluded that nothing good will come of it.

“Until the Brexit vote in 2016, UK-based rare disease advocacy groups were always essential to the work of the EU,” Collin wrote in her paper, which has not yet been published. However, she warned, Brexit — now set for March 29 unless the British Parliament approves an extension with the approval of the EU’s 27 other members — could undermine the work of those charities. Madeline Collin, who has Gaucher disease, wrote her dissertation about Brexit’s impact on rare disease patients. (Photo by Larry Luxner)

This, she said, “suggests they will no longer be able to adequately represent the needs of patients at a European level … and will lose their power to influence EU legislation.”

About 50 British patient advocacy groups currently belong to Eurordis, a Paris-based coalition of 837 smaller organizations that advocates for improved diagnosis of some 7,000 rare diseases and access to therapies to treat those illnesses. Through Eurordis, for example, in 2011 all British citizens gained the right to genetic testing that would help them learn whether they have any genes linked to inherited disorders.

But now, instead of lobbying the EU, British rare disease advocates will be forced to lobby the British government — a daunting prospect given their recent failures in attempting to get the National Health Service to pay the cost of ultra-expensive drugs such as Spinraza (nusinersen, by Biogen) for spinal muscular atrophy (SMA), and Brineura (cerliponase alfa, by BioMarin) for Batten disease.

On March 6, a drug appraisal committee of Britain’s National Institute for Health and Care Excellence (NICE) met in Manchester for the third and final time to decide whether to recommend Spinraza for reimbursement. Several hundred demonstrators organized by the nonprofit group TreatSMA staged a noisy protest on the steps of NICE’s headquarters ahead of the meeting — but their efforts have led nowhere so far.

“The British government appears rather unresponsive to the plight of rare disease patients, who constitute less than 7 percent of the population,” wrote Collin. She concluded that lawmakers in London are “currently far too concerned with other domestic issues such as unemployment and immigration to listen to the worries of rare disease advocacy groups and patients.”

Of particular concern, according to Collin’s report, is that once Britain finalizes its divorce from Brussels, drugmakers as well as the British government itself will treat U.K. rare disease patients with far less urgency.

That’s because right now, those companies need only one license to sell a specific drug across the European customs union, which they obtain from the European Medicines Agency (EMA).

Post-Brexit, however, companies will have to apply for a separate license through the Medicines and Healthcare Products Regulatory Agency (MHRA), making the process less lucrative since, obviously, the 64.5 million residents of Britain constitute a much smaller market than the 500 million people who live under EU jurisdiction as a whole. 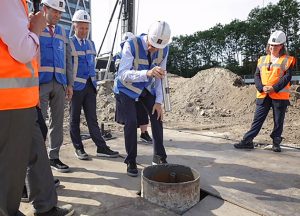 Officials of the European Medicines Agency lay the cornerstone of the EMA’s new Amsterdam headquarters at a May 2018 ceremony. (Photo courtesy of EMA)

“This will have an extremely negative effect on rare disease patients, who rely on pharmaceutical companies to provide them with their medication,” Collin wrote. “Without access to their medication, some patients could lose their lives.”

Elin Haf Davies is the CEO of Aparito — a developer of wearable patient monitoring devices —  and a former scientific assessor in EMA’s pediatric team.

“This is a devastating blow,” Davies told BioNews Services, publisher of this website. “We still don’t know whether or not it’ll be a hard Brexit, which would be the worst-case scenario.”

At least one consequence of the June 23, 2016, referendum in which 51.9 percent of British citizens voted to leave the EU is already being felt: the EMA’s transfer of its headquarters from London to Amsterdam.

Effective March 30, EMA will operate out of the Spark building until its final, tailor-made headquarters in Amsterdam’s Zuidas district becomes available. So far, the EMA said in a press announcement, nearly 350 staff members have already relocated to the Netherlands. A number of EMA staffers will telework from London, though overall, the agency still anticipates losing about 25 percent of its total workforce of around 900 people.

‘Hard’ Brexit could be disastrous

Davies, who worked as an EMA regulator for six years, spent 12 years before that as a pediatrician at London’s Great Ormond Street Hospital.

“We already know that marketing authorizing holders in the UK will have to transfer to Europe to be registered,” said Davies, interviewed at the 2nd International Congress on Advanced Treatments in Rare Diseases, held March 4-5 in Vienna. “What we don’t know is the impact of the customs unions, and whether we will be adopting same regulations exactly in the way Switzerland does, or if additional processes will be required,” Davies said. In a February 2018 opinion piece for the Financial Times, Spink pointed out that the MHRA accounts for 35 percent of the EMA’s drug safety monitoring, and about 40 percent of the evaluation of highly complex therapies.

“Nowhere has the value of a single market been seen more clearly than in the rare disease sector — medicines for rare diseases and medical devices get a single authorization to be used in the EU, providing for cost-effective licensing and distribution of medicines for small populations,” she said. “Losing this leverage and the incentives of the centralized process could be the difference between UK patients being able to access a new treatment for a rare disease or not.”

Another real concern post-Brexit is the loss of crucial EU funding, without which British scientific researchers may no longer be able to finance clinical trials.

“It will require monumental action to make sure British patients don’t suffer as a result,” Davies said, adding that delays in accessing life-saving drugs are a real possibility. “I’m afraid at this moment in time we won’t see any positive outcome from it.”

As if all that’s not enough, Collins said British rare disease advocacy groups are “incredibly worried” that — with fewer lucrative incentives and more stringent immigration controls in place — luring new medical talent to her country will be very difficult once Brexit is a reality.

“Very few individuals residing in the UK are capable of treating each individual rare disease,” she wrote. “It is paramount, therefore, that Britain is able to attract as many specialists to the country as possible.”