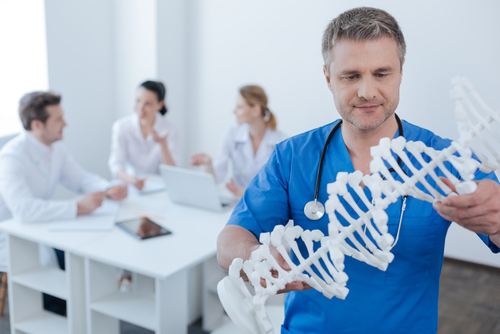 A new genetic variant of the COL4A5 gene was identified in the family of a Chinese boy with atypical X-linked Alport syndrome.

The case was reported in the study “Identification of a novel COL4A5 mutation in the proband initially diagnosed as IgAN from a Chinese family with X-linked Alport syndrome” that was published in the journal Science China Life Sciences.

The 9-year-old boy showed significantly increased amounts of red blood cells and proteins in the urine. He also had high blood pressure, inflammation of the liver, and a clinical history of lupus (an autoimmune disease).

Urinalysis showed that he had approximately 29 times the standard levels of protein. He also had low levels of blood albumin and slightly high total cholesterol.

His renal function was found to be within normal values, as determined by estimated glomerular filtration rate (eGFR). No structural changes were detected in his kidneys.

He showed some mild hearing issues; no vision abnormalities were detected.

Analysis of his family clinical history revealed that both his younger sister and mother showed signs of increased levels of red blood cells in the urine (hematuria). His uncle on his mother’s side had died at 26 because of a serious complication of kidney disease.

Based on this significant clinical family history of early-onset hematuria, but without hearing and vision problems, he was first diagnosed with Berger’s disease, also known as IgA nephropathy.

Analysis of a kidney biopsy showed some evidence of diffuse thinning of the kidney filtration unit’s basement membrane and it confirmed that he had deposition of IgA antibodies in the tissue. Researchers also found signs of moderate tissue proliferation, which were consistent with the diagnosis.

He started treatment with high doses of oral prednisolone in combination with CellCept (mycophenolate mofetil). After 16 weeks of treatment, he still had very high levels of protein in the urine.

At this point he switched to treatment with tacrolimus plus prednisolone. But this regimen also was ineffective.

Given his poor response to the treatment and inherited pattern of his illness, the clinical team conducted a genetic analysis to identify the underlying cause of his symptoms.

They found that the boy, as well as several members of his family, had a mutation in the COL4A5 gene that had not been previously described. They also lacked the part of the DNA sequence that encoded the CFHR1 and CFHR3 genes.

A predictive analysis of the impact of the newly identified COL4A5 mutation suggested that it had the potential to cause Alport syndrome. Following a skin tissue analysis, the team confirmed that the boy lacked the structural alpha5 chain of type IV collagen.

Collectively, these findings confirmed that he had X-linked Alport syndrome.

“In review [of] the diagnosis of this case, this [patient] should be diagnosed as Alport syndrome accompanied by IgAN rather than only IgAN based on the glomerular basement membrane diffuse thinning [detected],” the researchers said. “This case highlights the important of genetic testing to confirm diagnosis of inherited kidney disorders.”

The team also stated that the case may help in alerting clinicians “that it is important to consider the combination of [manifestations] during diagnosis of inherited kidney disease.”